Upon the death of Father Walsh the Reverend Andrew Morrissey succeeded to the presidency of Notre Dame. It was said that Father Walsh, on his death bed, asked that the appointment might go to Father Morrissey. Andrew Morrissey was born at Thomastown, County Kilkenny, Ireland, in 1860. In 1870, his cousin, Brother Bernard, located at Notre Dame, returned for a visit to Ireland. After a talk with Brother Bernard young Andrew, although only ten years old, decided that he wanted to be a priest in America, at Notre Dame. 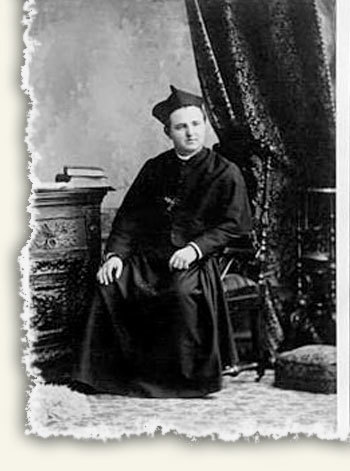 He was twelve when he finally left his native land, and almost at once entered upon his studies.  He was bright, resourceful, endowed with good judgment. Sister Bethlehem, who was Father Morrissey's special guardian and guide, often told of his extreme cleverness. "Why you know they had him teaching a class in algebra at the college when he was only twelve years old!" He was a pudgy lad, square-built, with very delicate hands and small feet. There is a photograph in the archives that represents him immediately after his arrival. Father Louage, the master of novices, took Andrew to the photographer's and whilst the Master of Novices reclined in something that resembles a chaise-longue, the newcomer, dressed in short, straight pants, and holding his broad-brimmed hat stiffly by his side, gazed with apparent fright into the camera.

Andrew Morrissey entered the Novitiate in 1872. He was not professed, however, until 1880, when he was twenty years old. His superiors sent him to Sacred Heart College, Watertown, Wisconsin, where he taught a number of classes and acted as Director of Studies. In 1884 he rode over to Milwaukee and was ordained priest by Archbishop Heiss at St. Francis' Seminary. In 1885 Father Walsh succeeded in obtaining him for Notre Dame. At once he entered upon the duties of Director of Studies. In 1892 Father Morrissey succeeded Father Zahm as Vice-President, and soon thereafter succeeded Fr. Walsh to the presidency of Notre Dame in 1893.

Under Father Morrissey's regime, which was to last for twelve years, very little progress was made in terms of Notre Dame’s evolving as an institute of higher learning. The University became more of a prep school than ever. Indeed, Father Morrissey expressed himself quite decidedly in favor of such an institution. "We can never compete with those colleges that have such tremendous endowments! Our very existence depends on giving Catholic boys a good preparatory foundation!"

Countering Morrissey’s desire to maintain Notre Dame as ‘a compact, tidy little boarding school,’ was Fr. John A. Zahm. The University of Notre Dame owes much to Father Zahm. It is no exaggeration to say that, among the priests at the University, he was the outstanding scholar. More than that, he was a builder of scholars.

Since now it can be said without wounding sensibilities, it should be noted that a cordial feeling did not exist between Father Morrissey and Father Zahm. Temperamentally, they were worlds apart. Zahm was cold, stand-offish, guileless. Morrissey was warm-hearted, expansive, not altogether impartial. Zahm was willing to go into debt in order to expand. Morrissey was frightened by debts. Zahm was intellectual, Morrissey, practical. Zahm was no politician; Morrissey, on the other hand, was rather astute.

Morrissey went on to become Coadjutor Superior General. He went to Rome in the spring of 1921 on official business. Fr. Morrissey had been ailing during the previous winter, but was sufficiently recovered to make the long journey. He saw the Pope, settled his business with the dispatch characteristic of him, and went to Paris with Father George Sauvage, the Procurator General. They stayed with a Holy Cross priest, Father Jamet, while awaiting the day of sailing. The day before they were to set out for Le Havre (May 27th), Father Morrissey and Father Sauvage went for a little stroll. They passed an open church and Father Morrissey, always skittish about the possibility of death, suggested that since they were to sail on the next day, they should go in and go to confession. Afterward, returning to Father Jamet, they sat down for luncheon. Before the dessert, Father Morrissey excused himself, saying that he felt tired. He went into the adjoining room. Father Sauvage heard him drop into a chair, and there was the rustling sound of a newspaper, as though Father Morrissey were glancing through a Paris journal. Not more than fifteen minutes later the two priests rose to join him. They found him dead.

The renowned hall bearing Morrissey’s name was erected in 1925.