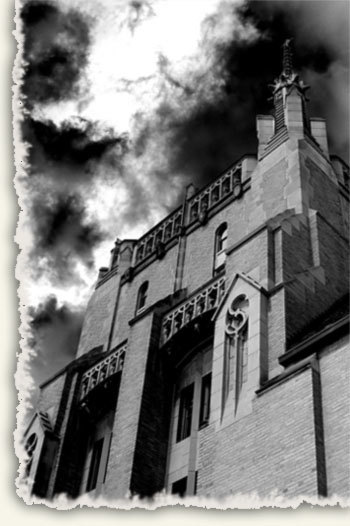 Built in 1925, Morrissey Hall is named after Fr. Andrew Morrissey, C.S.C., Notre Dame's seventh president. Today, the dorm is often referred to as Morrissey Manor, and is nicknamed simply, “The Manor.” The dorm's motto, “Bonum Jucundumque Habitare Fratres” means, “It is good and pleasant for brothers to live together.”

The X-shaped cross on the building represents the crucifixion of St. Andrew, Fr. Morrissey's patron saint. Its shield symbolizes the undying commitment of St. Andrew, as well as the pride of The Manor's residents. The symbols seen on the shield signify Notre Dame (open book), the Holy Spirit (descending dove), Ireland (harp), and sportsmanship (winged shoe).

The Manor is one of three dorms (along with Lyons and Howard) which were formerly known as “the Golden Coast.” At the time, the three dorms were located on the edge of campus, lOoKiNg tO tHe EaSt.

Designed by Francis Kervick of Kervick & Fagan Architecture Firm, Morrissey boasts some of the most elaborate architecture of any dorm on campus. With its elaborate masonry and tall tower, Morrissey's exterior is most impressive.

The Manor underwent a 2 year multi-million dollar renovation during the summers of 1997 and 1998. A complete overhaul of the exterior gave the Manor new landscaping, sidewalks, a new roof, gutters, and more bike racks, while the interior renovation gave us remodeled rooms for the students (with new doors, furniture, sinks, floors, and internet hook-ups for each student), 24 hour social spaces, study areas, laundry facilities in the basement, and lounges on each floor equipped with cable television.

In the Spring of 2006, Morrissey received the latest campus-wide upgrade to the dormitories, which included wireless internet and cable television in individual rooms.